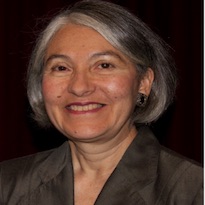 Prior to coming to Brussels to Head the NSF’s Europe and Eurasia Office, Sonia was a Program Director for East Asia and Pacific countries at the NSF’s Office of International Science and Engineering. She was an Embassy Science Fellow at the US Embassy in Malaysia, served as NSF representative in the Antarctic, worked as Director of Education and International Programs at the University of New Mexico and worked as Research Associate at Duke University before joining the NSF in 1989. She holds a PhD in Biology from the University of South Carolina and a Masters in Zoology from Duke University. She conducted research in tropical marine biology, especially in Latin American countries. She is a founding member of the Nicaraguan Academy of Sciences.

Dr Sonia Ortega started as the new Head of the National Science Foundation’s (NSF) Europe and Eurasia Office in December 2015. She has been at NSF since 1989 directing several large and complex programs spanning the gamut of education levels and disciplines including the Graduate STEM Fellows in K-12 Education, the Faculty Awards for Women and the Presidential Faculty Fellows Awards that she coordinated with the White House Office of Science and Technology Policy. For the last couple of years, she was a Program Director for South East Asia and Pacific countries in the NSF’s Office of International Science and Engineering. Before coming to the NSF, Dr Ortega was a Research Associate at the Duke University Marine Laboratory in Beaufort, North Carolina where she conducted research on the Ecology of Oyster Populations along the North Carolina coast. For three years, Dr Ortega was on leave from NSF and worked as Director of Education and International Programs at the Long Term Ecological Research (LTER) Network Office at the University of New Mexico in Albuquerque, New Mexico. Dr Ortega holds a BS degree in Biology from the University of Costa Rica, an MA in Zoology from Duke University, and a PhD in Biology from the University of South Carolina. Dr Ortega has extensive knowledge of science and engineering research and education policies and has represented NSF at national and international science and education meetings. She represented NSF at Palmer Station Antarctica. In 2012 Dr Ortega was selected as an Embassy Science Fellow to represent the US and the National Science Foundation at the US Embassy in Kuala Lumpur, Malaysia. She is a founding member of the Nicaraguan Academy of Sciences. In addition to English, she speaks Spanish, Portuguese and French.