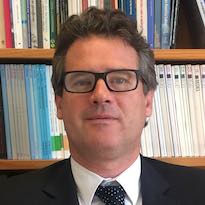 STI policies towards Gender Equality - filling the gaps
Plenary: Role of policy in achieving societal well-being through science and technology

Ernesto Fernández Polcuch is a Science Diplomat, a specialist in Science, Technology and Innovation Policy, with a M.Sc. in Science, Technology and Society from the National University of Quilmes, Argentina. He is currently Chief of Section for Science Policy and Partnerships in the Natural Sciences Sector of UNESCO. In this position he manages global UNESCO programmes in Science, Technology and Innovation Policy, Science Communication, Gender and STEM, Science Diplomacy, and Science-Policy-Society linkages, including the UNESCO Global Observatory of STI Policy Instruments GO-SPIN, the UNESCO Science Report, the L’Oréal UNESCO For Women in Science Programme, and the STEM and Gender Advancement (SAGA).  He was previously a Programme Specialist at UNESCO Windhoek (2008-2010) and UNESCO Montevideo (2010-2015) Offices, managing UNESCO’s Science and Technology Policy, Basic Science and Engineering programmes on a subregional and later Latin American and Caribbean scale.

Prior to this (2002-2008) he led the Science and Technology Statistics team at the UNESCO Institute for Statistics, Montréal. Before joining UNESCO he worked with RICYT (Argentina), the Ibero-American Network on Science and Technology Indicators, setting up the S&T indicators system in Latin America.He has also worked as a researcher and as professor at the National University of Quilmes and other universities in the region, as an adviser to the National Secretary for Science, Technology and Innovation in Argentina, and as a consultant to various National and International agencies, (including UNESCO, OAS, the World Bank and OECD).  He has published numerous papers related to Science, Technology and Innovation policy and statistics, and Higher Education policy, in national and international peer reviewed journals, book chapters, and research reports. He has also presented at international conferences and conducted training and capacity-building seminars and workshops worldwide.