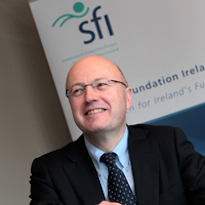 Professor Mark W.J. Ferguson commenced as Director General of Science Foundation Ireland (SFI) in January 2012 and as Chief Scientific Adviser to the Government of Ireland in October 2012.  Previously, Mark Ferguson was appointed Professor in Life Sciences at the University of Manchester in 1984, aged 28, when he was the youngest Professor in Britain. He has held a number of administrative posts including Head of Department and Dean. He played a key role in the internationally acclaimed restructuring of Life Sciences at The University of Manchester. Mark has wide ranging research interests which focus on cellular and molecular mechanisms in scarring and wound healing, developmental mechanisms in normal and cleft palate formation, alligator and crocodile biology. He is the discoverer of scar free embryonic wound healing and temperature dependent sex determination in alligators and crocodiles.

He is the recipient of numerous international awards, prizes, medals and honours for his research work, including the 2002 European Science Prize (jointly), The International Association for Dental Research, Washington USA Craniofacial Biology (2000) and Distinguished Scientist / Young Investigator (1988) Awards and the Swedish JJ Pindborg International Prize for Research in Oral Biology (1996) and is the author of 327 research papers and book chapters, 60 patent families and author / editor of 8 books.Mark has supervised over 70 PhD students and been awarded more than £70M in International peer reviewed research grants from major Research Councils and Charities. He has delivered hundreds of plenary lectures at International Scientific Conferences and contributed to numerous TV and Radio programmes on Scientific Research and its utilisation.  Mark has a deep interest in translating scientific research findings into successful commercial entities. He founded and funded (including a £13.5M state of the art building) the Manchester Biosciences Incubator, which has successfully mentored and housed a number of start up companies. Based on inventions and patents from his University research, Mark co –founded (with Dr Sharon O’Kane) Renovo, a biotechnology company developing novel pharmaceutical therapies to prevent scarring and accelerate wound healing. As CEO, since foundation, Mark built and led Renovo from 2 people to a peak staff of approx 200, and from being a small private start up to a listed public company. He was personally involved at every step of this evolution: hiring key staff and Directors, raising £32M of private International Venture Capital, pursuing commercial research and development including clinical trials of potential products , interacting with International Regulatory Authorities, licensing ( including negotiating a US $830M plus royalties deal for the lead drug ), liaising with major banks , analysts and investment funds including an IPO on the London Stock Exchange raising £67.5M, and restructuring Renovo in response to advanced clinical trial data and commercial opportunities.  Mark is currently Honorary Professor of Life Sciences at the University of Manchester. Mark has been President of a number of Learned Societies eg European Tissue Repair Society, chaired the first UK Government’s Health and Life Sciences Foresight Panel, and served on many committees eg the UKTI Life Sciences Marketing Board, the Committee of Safety of Medicines Biological Subcommittee and the European Space Agency. He has served on the Board or Scientific Advisory Board of a number of International Biotechnology and Pharmaceutical Companies.  Mark Ferguson, was born in Northern Ireland , attended school in Ballykelly and Coleraine and graduated from the Queens University of Belfast with degrees in Dentistry (BDS 1st class honours), Anatomy and Embryology (BSc 1st class honours, PhD) and Medical Sciences (DMedSc), holds Fellowships from the Royal Colleges of Surgeons in Ireland (FFD), and Edinburgh (FDS) and is a Founding Fellow of the UK Academy of Medical Sciences (FMedSci). He is a member or Fellow of a number of learned Societies, and was made a “Commander of the British Empire” (CBE) by the Queen in 1999 for services to Health and Life Sciences.