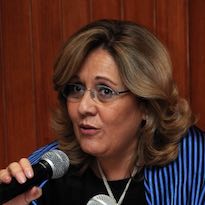 Director of the Regional Center for Multidisciplinary Research (CRIM) of National Autonomous University of Mexico, Mexico.

‪‬‬ Professor Velázquez is currently carrying on research on gender, climate change and energy as well as in new directions in gender perspectives. She is coordinator of the Academic Network on Gender, Society an Environment funded by the Nacional Council on Science and Technology (CONACYT).