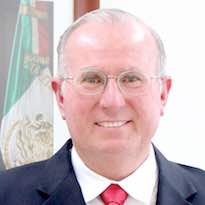 Prof Francisco Javier Mendieta-Jimenez obtained his bachelor’s degree in Mechanical and Electrical Engineering from the National University of Mexico (UNAM), and his Certificate of Higher Studies and Doctor of Engineering degree from the National Superior School of Telecommunications (ENST), France, in the field of Optical Telecommunications. At the Institute for Electrical Research (IIE), Mexico, he was involved in development projects on applications of optical fibers to electrical power systems. During a leave at the Utah State University (USU), U.S.A., he participated in a project on instrumentation for space experiments. At the Center for Scientific Research and Higher Education of Ensenada (CICESE), a Center coordinated by the Mexican Agency for Science and Technology (CONACYT), he formed the optical communications group and laboratory, where he has leaded diverse research and development projects on optical telecommunications, free space optical satellite communications and detection.

He is a lecturer in graduate courses and continuous education on optical and digital telecommunications, and has been adviser for several Master’s and Doctor’s degrees thesis. He spent a sabbatical leave at Telecom Paris Tech, LTCI Laboratory of the National Center for Scientific Research (CNRS), France, in the field of optical communications. He has published in diverse scientific journal and conferences papers, and holds several patents. He was awarded the following recognitions for his contributions: the “Emilio Rosenblueth” prize, from the National Academy of Engineering, Mexico; the “Ericsson Telecommunications” prize, from Ericsson – Mexico; the “Mexican Academy of Optics Prize” from the Mexican Academy of Optics. He is a member of the National Research System (S.N.I. level 2) of CONACYT, Mexico. He served as Director of the Applied Physics Division and General Director of CICESE. On the space field, Dr. Mendieta was the 2o candidate astronaut for the Shuttle mission, was leader in CICESE of the SATEX 1 (Experimental Satellite in Spanish) Project that was a coordinate national effort to develop human resources in space sciences around a microsatellite project. Recently was the leader of the SENSAT (Self Explore Nano SATellite) that was a two-year project to develop an educative nanosatellite concept to promote the developing of space technology and the acquisition of practical skills for students and workforce in aerospace. Since November the 1st he has been appointed as the first General Director of the Mexican Space Agency.