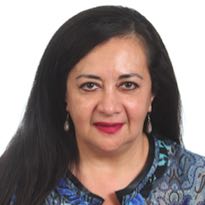 Dr Elia Martha Pérez Armendariz is an MD, PhD and professor at the School of Medicine of the National Autonomous University of Mexico (UNAM), Member of the Mexican Academy of Sciences and of the National System of Researchers of Mexico. MD from the School of Medicine at UNAM, M.Sc. in neuroscience and PhD in physiology and biophysics from the CINVESTAV, IPN in Mexico City. She worked at the NIDDK, NIH, and at the Albert Einstein College of Medicine, Bronx, NY, USA as postdoctoral researcher as well as professor at the last institution.

She is pioneer in the study of modulation of pancreatic beta cell function by intercellular channels as well as in science and gender studies in México. She founded the first groups of women in sciences in Mexico, and was the main leader in promoting the inclusion of the gender perspective in the law of science, technology and innovation of Mexico. Vice-president of the Mexican Chapter of the OWSD, Founder and Director of the Women in Science network at UNAM, co-editor of the books Women in Science in Latin America, and Policies to stimulate and recognize the gender and science studies in Mexico. Among her awards she obtained a First Independent Research Award from the NIDDK-NIH, International Women Research Award from the NSF and AAASc and a Basic Science Research Award from the Scientific Institute Pfizer of Mexico.