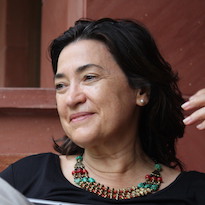 Professor, Institute of Biotechnology of the National University of Mexico (UMAM), Mexico.

Susana López is Professor at the Institute of Biotechnology of the National University of Mexico (UNAM). She made her undergraduate and PhD studies in Basic Biomedical Research, at UNAM, in Mexico City. Her area of expertise is Molecular Virology and she is interested in the study of the biology of viruses that cause gastroenteritis in children, with special emphasis in rotaviruses. Dr Lopez has formed a successful group of research with Dr Carlos F. Arias, and together they have published more than 100 peer-reviewed articles. She has been the direct advisor of 30 graduate students, many of whom have now their own virology labs in Mexico and abroad.  In 1993 she was awarded the prize of the Mexican Academy of Science in Natural Sciences, a national prize for young researchers. She was appointed as an International Howard Hughes Scholar from 2000 to 2010, within the Parasitic and Infectious Diseases program. In 2001, she was awarded the Carlos J. Finlay prize by UNESCO, and in 2008 obtained the TWAS prize in Biology. In 2012, Dr Lopez was awarded with the For Woman in Science prize given by L´Oreal-UNESCO, and more recently, in Nov. 2013 she shared the UNAM prize in Natural Sciences with Dr Arias. Currently, she is a permanent member of the NIH study group in Virology (2012-2016), and was appointed as Editor of the Journal of Virology, for the 2013-2018 period.