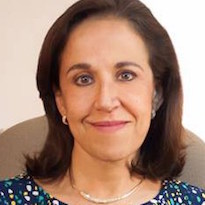 A Ph.D. graduate from the University of Pennsylvania, she is currently a Full Researcher at UNAM’s Institute for Social Research. She has held different high-ranking positions at UNAM as well as in the Federal Government.  During 2012-2015, she was appointed Director of UNAM’s Open and Distance Education, while during 2012-2014 she was elected President of the Common Space for Distance Higher Education (ECOESAD, in Spanish) and VicePresident of the Mexican Mathematical Society. Her teaching endeavors includeUndergraduate as well asMasters’ and Doctoral programs, where she conducts courses and seminars, and advices an important number of graduate thesis.  She is very active in the Graduate schools of Engineering (field of Systems and Planning, and Operations Research) and of Management Sciences.

She has published numerous research papers, book chapters, and scientific diffusion papers as well as conducted many programs to promote science among young students. She is a member of Mexico’s National System of Researchers and of the Mexican Academy of Sciences, which she represents in IANAS’ Women for Science program.