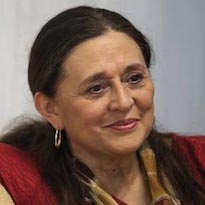 María Amparo Martínez Arroyo holds a Bachelor in Biology and a Master on Sciences from the National University Autonomous of Mexico (UNAM) and a PhD. in Ecology from University of Barcelona, Spain (Cum Laude Honors)Cum Laude. PhD. Martinez Arroyo worked as Director of the Center for Atmospheric Sciences (CAS) of the UNAM from 2009 to August 2013, and is still Senior Researcher and Atmospheric Aerosols Group Coordinator. Has been pioneer in the study of atmosphere-biosphere interactions in aquatic systems, analyzing photosynthesis processes (carbon dioxide capture and oxygen production), as well as emission and biogenic catching of other gases climatically active (dimethyl sulphide, methane) in continental, coastal and marine ecosystems. Ph.D. Amparo Martinez is an expert in environmental problems analysis, and in the relations between science and society

. This research line has allowed her to contribute to different aspects in the science application to public management. Also, has collaborated, for example, in the design and implementation of the National Clean Beaches Program; in the elaboration of a scientific strategy for the establishment of a Marine Protected Natural Areas network in North America to the Climate Change; and has lead the Climate Change issues in the Science, Technology and Innovation in the Citizens Agenda, among several academic, scientific and legislative institutions. During the time she worked at the CAS, she designed and launched, among other projects, the network of Atmospheric Observatories in universities.  Her research includes the effects of climate variability and climate change on aquatic and terrestrial ecosystems and the possible scenarios of evolution of these under different climatic and environmental conditions. María Amparo Martínez Arroyo has published articles in international journals, book chapters, papers and technical reports. She has participated in different research projects with national and international funding. She has directed bachelor, master and doctoral thesis. Also, she has participated in several activities of scientific dissemination and capacity building.