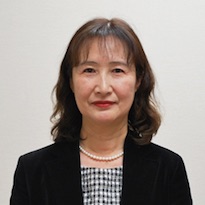 Miyoko O. Watanabe is Senior Director at Japan Science and Technology Agency (JST). She is also the agency’s Director of the Office for Diversity and Inclusion. Dr Watanabe is a member of the Science Council of Japan and chair of the council’s Committee on Comprehensive Synthetic Engineering in Science. She is also a member of the Science and Technology Council at Ministry of Education, Culture, Sports, Science and Technology in Japan, as well as a Member of Specialist Committee on Formulating the Fourth Basic Plan for Gender Equality in the Council for Gender Equality of the Japanese Cabinet Office. She worked in various roles for Toshiba since 1979.

In Toshiba, she has been Executive Quality Leader and Senior Quality Expert in Innovation Division, among others including positions with Toshiba R&D Divisions. Previously, she was a researcher at the JRCAT Project at the Japanese Ministry of Economy, Trade and Industry as well as a visiting researcher at the Nanoscale Physics Research Laboratory, at the University of Birmingham, U.K.