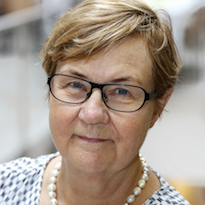 Professor Gunnel Gustafsson is the Director of NordForsk since 2010. NordForsk was established during the time when she served as Deputy Director General of the Swedish Research Council. She is professor emerita in Political Science at Umeå University where she has also served as vice rector. Her research interests are broad and include comparative governance,  democracy in theory and practice, gender perspectives on politics and administration, local government reforms in the Nordic countries, and comparative political cultures.