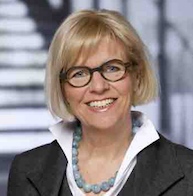 Ingrid Wünning Tschol is Senior Vice-President and Head of Health and Research at the Robert Bosch Foundation. Born in 1958, she received her PhD in Biology from the University of Tübingen Germany in 1985. 1985 -1990 she did postdoctoral research at Massachusetts Institute of Technology in Cambridge and State University of New York in Stony Brook, USA. Further stations in her career were: Head of Molecular Biology/ Cell Biology Unit at Deutsche Forschungsgemeinschaft in Bonn/Germany, Head of Medical Section at the European Science Foundation in Strasbourg/France. Since 1999 she has been with the Robert Bosch Stiftung, Stuttgart/Germany.

She is or was member of numerous national and international committees. Amongst them she served as Vice Chair of the European Research Area Board (ERAB), which directly advised the European Commissioner for Research from 2008 to 2011, during this time she was also a member of the Scottish Government Personal & Support Research Fellowship Selection Panel of the Royal Society of Edinburgh. More recent committee activities include her Chairmanship of the EFC-Research Forum, her membership in the Advisory Board of the Max-Planck Institut für die Dynamik komplexer technischer Systeme in Magdeburg, in the Steering Committee for ESOF 2016 in Copenhagen, the Board of Trustees for the Falling Walls Conference, the Universitätsrat Ulm or in the Advisory Board of the Uppsala Health Summit.

Watch Dr Ingrid Wünning Tschol talk at the 5th International Conference Academic Publishing in Europe, What scientists & those who fund #research expect from scientific Publisher on our Youtube channel