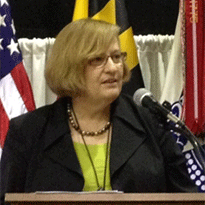 Dr. Falcone is responsible for National Security and International Affairs in the Office of Science and Technology Policy. She was confirmed by the Senate and appointed by President Obama in August 2012.  Her work seeks to strengthen innovation and technical excellence in support of U.S. defense, intelligence, and national- and homeland-security missions and to ensure technical matters are effectively included in ongoing policy and budget development processes. Previously she was a Senior Manager at Sandia National Laboratories in Livermore, California where she was responsible for Systems Analysis and Engineering; earlier, she was named a Distinguished Member of the Technical Staff at Sandia. Falcone holds a B.S.E. in Aerospace and Mechanical Sciences from Princeton University, and M.S. and Ph.D. degrees in Mechanical Engineering from Stanford University.

Dr. Falcone charied the plenary session on "Developing joint policies for innovation and partnerships in STEM higher education as a means of widening access to knowledge" and focused on framing key issues and motivating both policy development ideas and the definition of prototype actions, at the Gender Summit 3 North America 2013 (GS3NA).