Policy Manifesto on "Integrated Action on the Gender Dimension in Research”

The  Manifesto represents the collective views of individuals working in the European science system on the actions needed to enhance research and innovation by addressing gender equality issues.

Each of the nine actions distills the responses received to the questions asked in the online public consultation conducted by genSET as part of the 1st European Gender Summit in 2011, which was then combined with the discussions at the EGS2011. 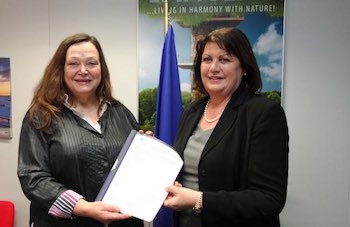 The manifesto attracted thousands of signatures from women and men working in science, head of institutions and department; professors; researchers; staff scientists; doctoral and postdoctoral candidates within month of its launch on-line.

The Manifesto was presented to Commissioner Máire Geoghegan-Quinn, Commissioner for Research, Innovation & Science, DG Research, Innovation & Science, European Commission on 16th December 2011.  The widespread support that it has received from the science community confirmed the overwhelming desire for changing research and innovation cultures and for making science more responsive and responsible to the needs of women and men as equal members of society.

We invite you to read and sign the manifesto.