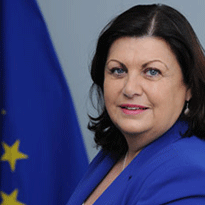 “It is clear that time alone  will not redress the under - representation of women in research or scientific leadership. Specific measures are needed to support women's scientific careers, and to address gender factors in the research process, with a view to improving quality. This will also help enhance scientific excellence in Europe. The European Gender Summit will show how these issues can be tackled more effectively through collaboration between scientists, gender research scholars and policy makers. The programme sessions will draw on solid research evidence to demonstrate that improved action on gender equality can yield improved creativity, better scientific results and more successful organisations.”
Mrs Máire Geoghegan - Quinn, European Commissioner for Research, Innovation and Science, 2010 -2014

Over 300 participants, representing over 200 organisations attended the first European Gender Summit in 2011. The first Summit brought together 65 speakers from leading roles in research, policy and industry. Speakers explored how the gender dimension stimulates excellence and innovation in R&D&I and showcased examples of effective gender equality programmes. Delegates exhibited over 50 posters. Download

During and in the run up to the European Gender Summit 2011, Portia and ESF conducted an extensive public consultation with hundreds of representatives of the scientific community. Through this a collective agreement on policy development on gender for innovation improvement, entitled the Policy Manifesto on "Integrated Action on the Gender Dimension in Research”, was produced. The Manifesto was presented to Máire Geoghegan Quinn, EC Commissioner for Research, Innovation & Science on 16 Dec 2011 and has received over 4000 signatures within a year. Read more about the GS1 Results.